Back in the Stone Age – wait, make that the Stonewashed Age – of the 1990s, back when teenagers actually talked on the phone for hours rather than txtd lol smh ikr?!, back when the only Muslim any of us had heard about was Muhammed Ali, tragedy actually felt tragic – to everyone.

I still remember, for example, where I was standing when I first heard about the Branch Davidian shooting in Waco, Texas as a 12 year old. I think for many people, huge disasters such as Waco, Columbine, and September 11 were so shocking that we’ll never forget the moment we first heard about them.

Fast forward to today. With flags flying at half staff constantly as wave upon wave of violence erupts closer and closer to home, all of us are losing our sense of shock.

“Did you hear there was another shooting?”

“Oh, yeah; heard about that. Terrible.”

“Did you see the tournament?”

“Are you kidding? Could you believe that?! That ref needs to be fired!”

I have to plead guilty. I couldn’t tell you where I was when I heard about the Paris attacks. Or the Fort Hood massacre. Or the Boston Marathon massacre. The only thing I really know that they had in common was that they were terrorist attacks.

Oh, and that other thing. Yeah. That thing that if I say, I’ll be encouraging more terrorist attacks.

Where did we ever get the idea that to state the obvious somehow makes us guilty?

Why would saying that Islam often leads to terrorism spawn terror if that claim is false?

Isn’t that contrary to human nature? If people begin pointing fingers at, say, Christians, claiming we are ideologically dangerous and liable to go off on anyone at any time, isn’t the kneejerk reaction of most Christians to go to the furthest extreme possible to prove them wrong?

(I’m talking about Bible believers, not Dark Ages Europeans who called themselves Christians yet killed Bible believers, Jews, Muslims, and anyone else who threatened their sense of propriety, but I digress:)

For that matter, my atheist friends are constantly working to disprove common misconceptions people hold about them – stereotypes like how they don’t care about others, or that they have no sense of purpose. They really want people to know they aren’t like that.

When people say mean things about you, isn’t it human nature to want to prove them wrong? Especially when they aren’t true in the least?

That’s the effect that should happen when people say “Islam is responsible for most terrorist attacks” if Islam isn’t really responsible.

Now, before I go further, let me say that if you are Muslim, I don’t think you personally are responsible for evil that’s occurring. I understand that the majority of Muslims are kind people who are trapped in a confusing situation.

I understand that the radical jihadists want you to think everyone is against you so you’ll run to them for comfort. I believe you are smarter than that. I believe you can probably see that you’re being played, even if you don’t believe Islam is responsible. Unfortunately, the rest of the world lives in fear of your religion.

They say perception is reality. If that’s true, then the reality is that Islam is behind most acts of terrorism. NOT YOU, mind you, but your religion. The same religion that makes carrying a Bible down the streets of Mecca equivalent to an act of suicide is perceived by billions as a dangerous cult.

Again, that’s not the same as “Muslims are responsible for terrorism,” but “Islam is responsible.” “This is what happens when people follow a dangerous cult.”

Because any “religion” that starts out warm, fuzzy, and peace-loving and ends with pipe bombs and dead bodies littering the foyer is a dangerous cult.

When your loved ones are in a dangerous cult, you don’t hate them. You fear FOR them. OUT OF LOVE.

We Have a Problem. Big Time.

Imagine you come home and find a massive elephant in your living room wearing a tag that says “Islam.” You hope it’ll just go away, but instead it expects you to make room for it. When you try to ignore it, it gets angry and starts to charge you.

Instead of pointing out the rampaging elephant named Islam in the middle of the room, you begin to attempt to make room for it.

“Islam is not the problem, let it stay…”

“It’s got a good heart, it just rubs certain people the wrong way.”

“If you say anything bad about it, you’ll make it angrier.”

“It’s just scared when people say mean things about it, and that tends to make it more violent.”

As we keep saying nice things about Islam, it’s making itself at home. More and more of our sons and daughters are hearing our words and deciding maybe Islam would make a good playmate. As its destructive nature grows and we realize we must do something, we find ourselves unable to say anything for fear of upsetting our children who have decided to adopt Islam.

As insane as the decision to ignore the elephant has been, many people would now make an even worse one. Instead of taking responsibility to get rid of the elephant, they would blame their children who want to adopt Islam.

That’s the problem with taking measures against people who have chosen to adopt the Muslim faith. Yes, those poor souls are messing with fire. It becomes clearer each time we hear of another bombing.

They are created in the image of God just like you, made to bring Him glory, bought and ready to be forgiven by the blood of Jesus. If only they get the chance to hear that they’re loved.

That means pitying the deranged terrorist who blows himself up and wakes up in the flames rather than paradise because he believed any act he could perform could atone for his soul. Pity belongs to anyone who misses the love of God and seeks to hack his way into a heaven that’s been offered freely to him through the sacrifice of Jesus Christ.

To miss Jesus is to miss the door.

Muslims Are Not the Problem. Darkness Is.

Darkness – evil – is and always has been the problem. Not the victims of evil. Yes, darkness sometimes constrains people to commit evil deeds for which they will stand in judgment, both before an angry world and before a holy God.

Still, until we understand that the only way to end this blight on our modern civilization is to shine enough light to eliminate the darkness, evil will spread.

So what can we do about it? Simple. Shine the light of the glorious gospel of God.

The word gospel comes from two words: God and spell. In other words, the gospel is the spelling of God, God’s word. Spreading the gospel means spreading God’s word.

Sharing God’s word is as easy as sprinkling random words of Scripture in your everyday conversation. It doesn’t require a sermon or a chapter and verse reference. You can do it anywhere, overtly or covertly, with the same results. God has promised, “My word…that goeth forth out of my mouth…shall not return unto me void, but it shall accomplish that which I please, and it shall prosper in the thing whereto I sent it.”

Imagine what would happen if each of us shone the light of God’s words around us constantly. The darkness would have no place to hide! Those who have been at the mercy of darkness would suddenly be able to see a way out. You think people like wrestling with the devils that whisper in their ear to go bomb their friends and neighbors? I doubt it.

Instead of demonizing the ones walking in darkness, let’s give them some light before the darkness makes us forget we have any light to offer.

Thanks to Jesus, We Have Hope – Come What May

Remember the words of Scripture President Bush mentioned after 9/11? How much more do they speak today:

Who shall separate us from the love of Christ? shall tribulation, or distress, or persecution, or famine, or nakedness, or peril, or sword?

As it is written, For thy sake we are killed all the day long; we are accounted as sheep for the slaughter.

Nay, in all these things we are more than conquerors through him that loved us.

For I am persuaded, that neither death, nor life, nor angels, nor principalities, nor powers, nor things present, nor things to come, nor height, nor depth, nor any other creature, shall be able to separate us from the love of God, which is in Christ Jesus our Lord.

Let’s shine that love on every Muslim, atheist, Christian, and anyone else we can find. 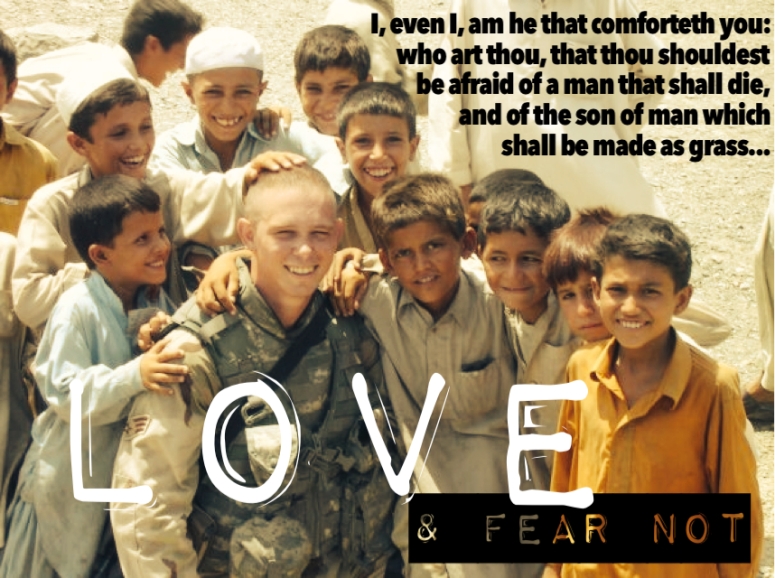 This site uses Akismet to reduce spam. Learn how your comment data is processed.

Here’s what else is new:

There was an error retrieving images from Instagram. An attempt will be remade in a few minutes.